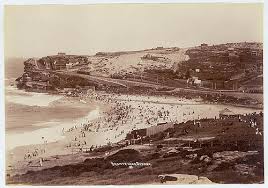 Below is a chronology of the Bronte Swimming Club.  .

Please also refer to our History Photo Gallery for historical photos of both the Club and swimming at Bronte Pool.

A Full history of the Club and Bronte Pool is available via downloadable pdf documents BELOW.

1908                Gladys Tate and Fanny Durack of ESLSC selected for Australasian Championships held in Brisbane in March.

1909             31 Oct - The newly formed Bronte Ladies Swimming Club held its first session including 31 ladies. They held a swim in the bogey hole and then had afternoon tea in the Park. There is little subsequent evidence of its continuing existence. Assume the swimmers were absorbed into the ESLSC over time.

1909                The Eastern Suburbs Ladies League Swimming Club formed and started swimming at Farmers Baths, Rushcutters Bay. No evidence of its existence past 1912 is available.